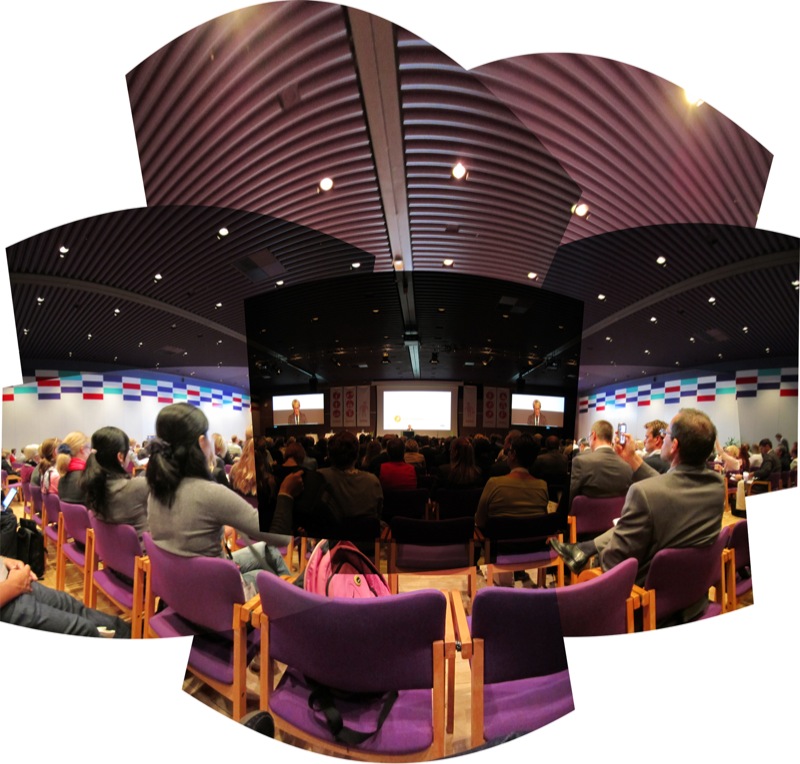 Ambient Assisted Living Joint Program is a new joint research and development funding activity by 23 European Members and Associated States with the financial support of the European Community provided on the basis of article 185 of the EC treaty.

The overall objective of the program is to enhance the quality of life of older people and strengthen the industrial base in Europe through the use of Information and Communication Technologies (ICT).

In the context of the “AAL Forum Odense 2010” the “Young Researchers and PhD workshop” involves students and young researchers from various backgrounds, presenting their research towards technical solutions for the elderly people. There are three tracks: 1.Ambient Intelligence and Health Care in Elderly; 2.Communication technologies and interfaces; 3. Serious Games, Robotics and Social Networks.

Note: As most of the conference was described in excellent detail by Wei Jun (http://mixedrealitylab.wikia.com/wiki/Report), I will instead focus more on my personal reflections on certain aspects of the conference.

Members of the Psychology Department of the University of Vienna, Austria conducted this year’s RISE workshop (http://www.aalforum.eu/group/youngresearchersandphdworkshop) at the AAL (http://www.aalforum.eu/). Participating students hailed from all over Europe including countries such as Austria, Germany, The United Kingdom, The Republic of Ireland and more. We were the only participants from the Asian region.

As funding for the workshop was commissioned by the European Union, much of the forum was focused on the aging population within the European context. I was very good to learn and discuss topics within this research field with our EU counterparts. I also particularly noticed that we, as students from Singapore, were able to add a fresh perspective to our colleagues as to how we as researchers working within an Asian context deal with similar problems. The issues of an aging population and how policy and technology can help alleviate many of the problems is indeed shared on an international level.

One project that could be of particular interest to the lab’s research was a robotics-based. Intended to replace the role of seeing-eye dogs, INVIGBOT (http://media.i2bc.es/?tag=invigbot) is a tripod-type robot that accompanies visual impaired people. Equipped with a series of sensors, INVIGOT essentially extends the senses of the person it is accompanying; translating what it sees into audio cues for the person it is assisting.

The AAL conference proper was focused mostly on the policy of addressing an aging population in Europe, with a small track for research into this field. Most of the other tracks included economics, policy, healthcare, etc.

Many prominent speakers attended the conference from various fields including Ray Kurzweil (http://en.wikipedia.org/wiki/Ray_Kurzweil), Neelie Kroes (http://en.wikipedia.org/wiki/Neelie_Kroes) and Takanori Shibata (http://www.aist.go.jp/MEL/soshiki/robot/biorobo/shibata/shibata.html) were present and gave talks. In regards to the lab’s research, Takanori Shibata’s talk was of particular interest.

Paro (http://www.parorobots.com/) is a therapeutic robot that is used in care giving to reduce patient stress and stimulate interaction between patients and caregivers. It is used mostly in Asia and Europe and has shown success in regards to it intended design.

Technologically, Paro is embedded with five types of sensors including tactile, audition, temperature and posture sensors, which it used to perceive its users and environment. It also uses artificial intelligence to learn the habits of its user in order to adjust its behavior. Another interesting point is that each Paro exterior is handcrafted so that every Paro is different and therefore unique.

The AAL Forum has a wide scope and covers many aspects and issues when addressing the topic of an aging population. As it was only the second iteration of the forum, the research track felt under-developed but expresses much promise for future conferences. The RISE workshop in particular was a very interesting and rewarding experience and I recommend lab members to submit to following conferences. The aging population is an issue which is not restricted to a single country or region, and it would benefit anyone with research aspirations in this field to attend in order to get a perspective from our European counterparts.

Retrieved from "https://mixedrealitylab.fandom.com/wiki/AAL_Forum_-_Report_by_Jeffrey_Koh?oldid=3950"
Community content is available under CC-BY-SA unless otherwise noted.